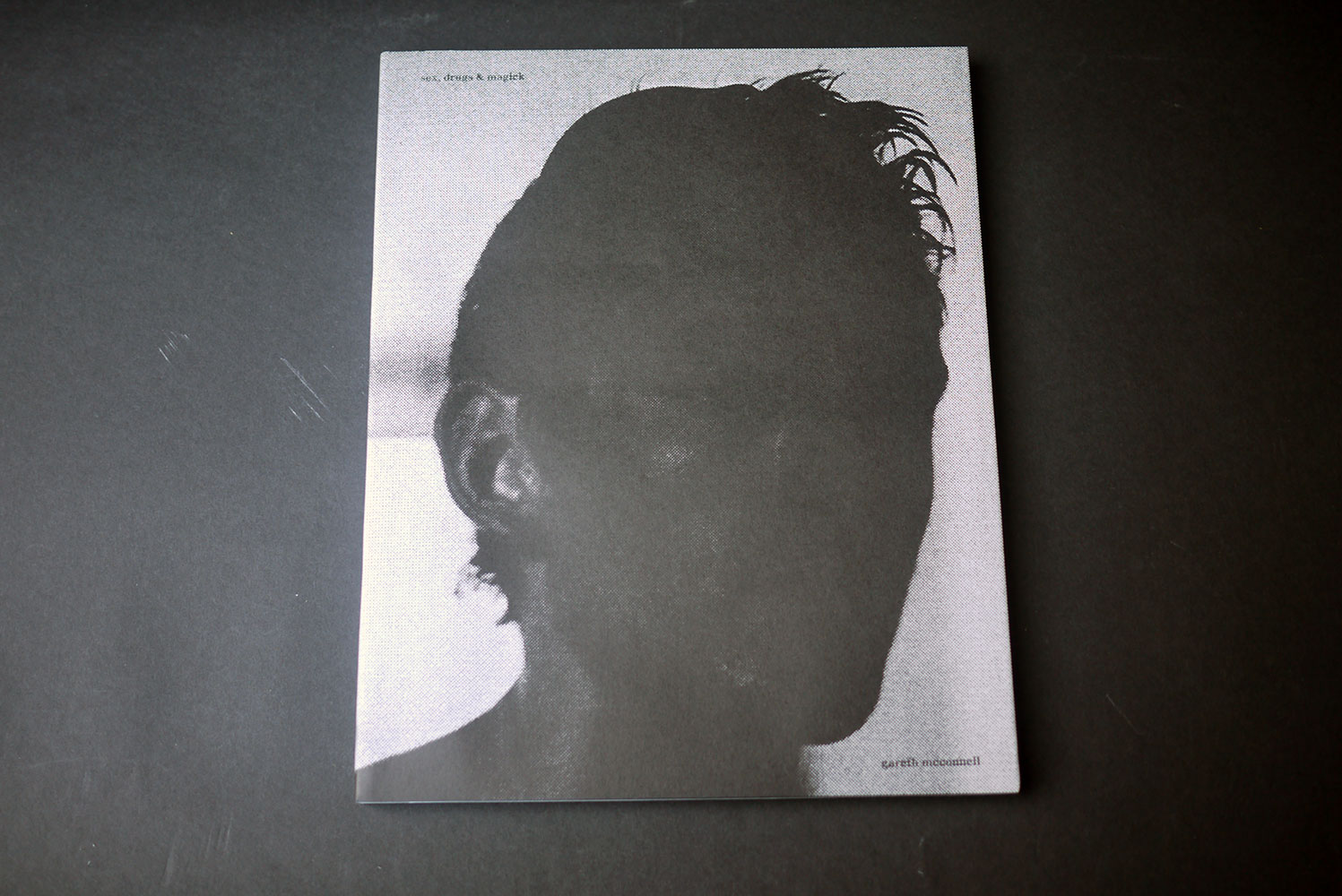 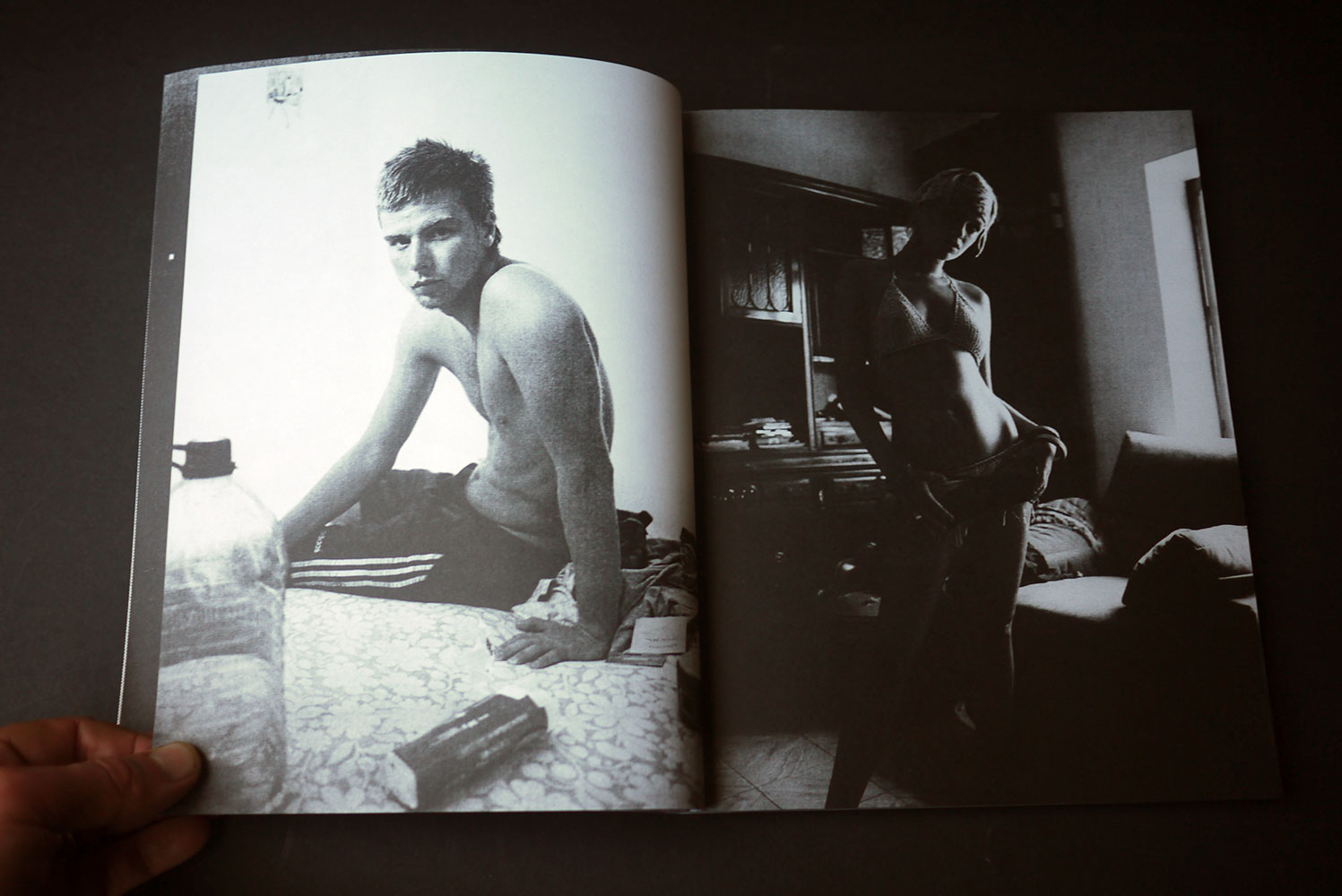 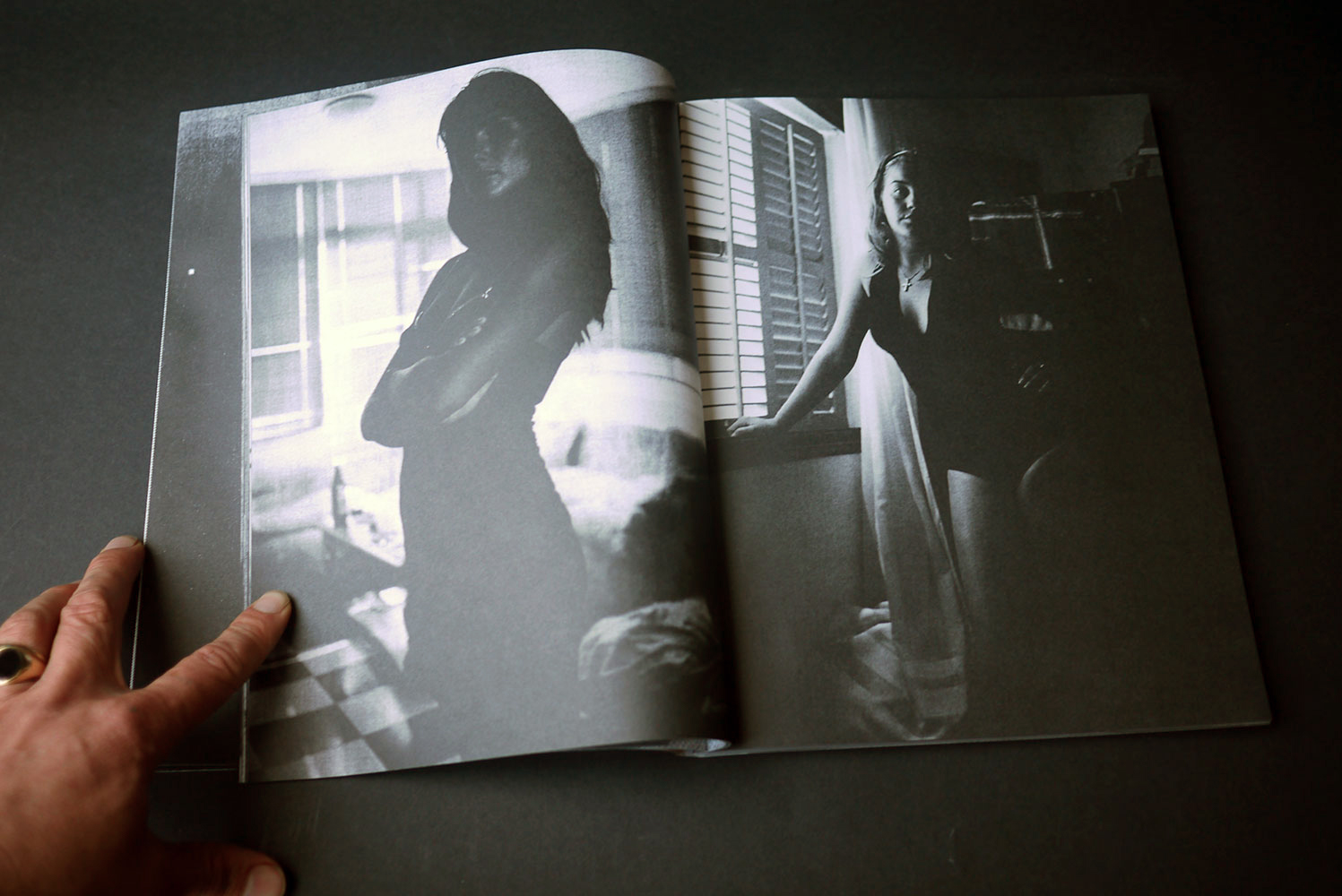 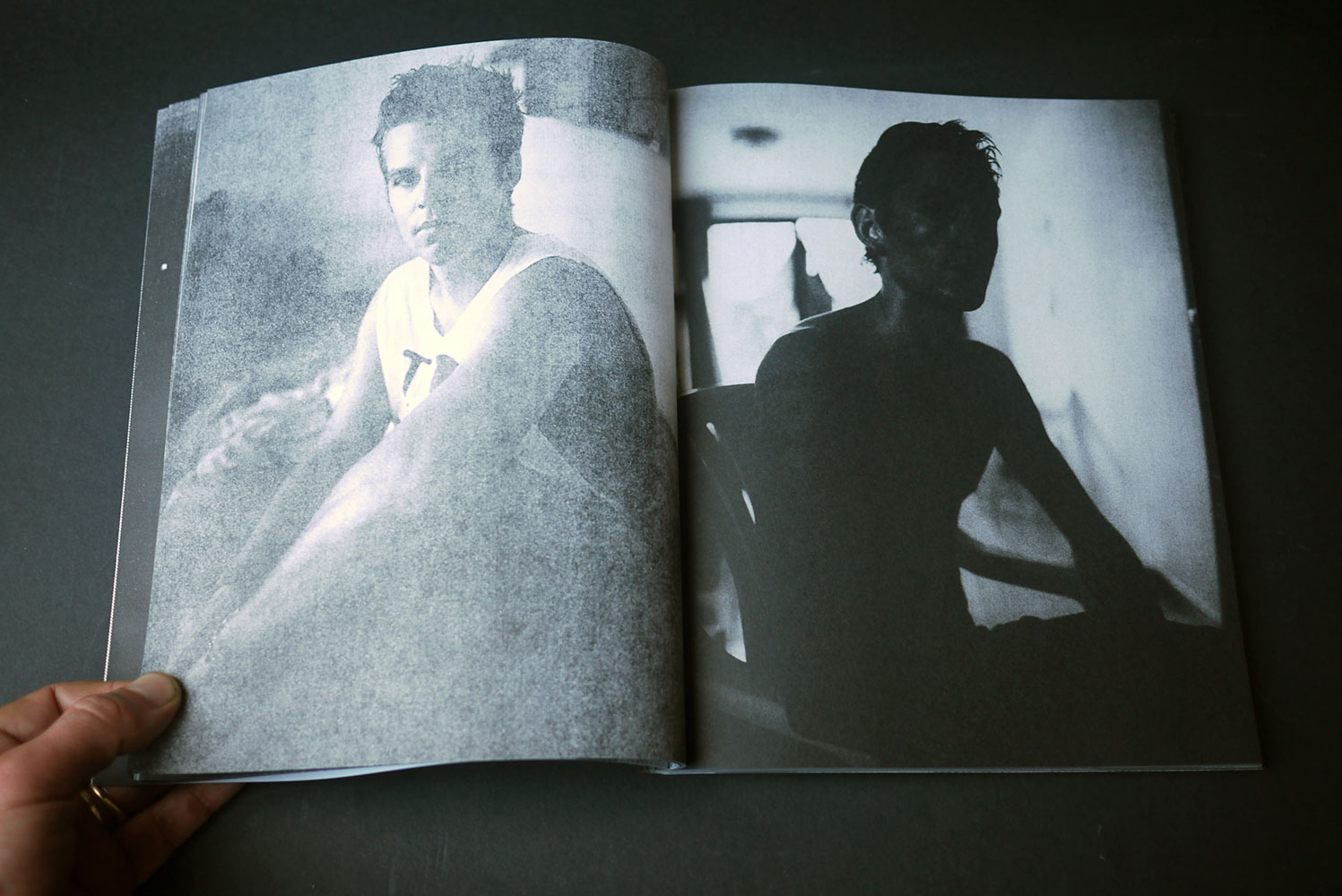 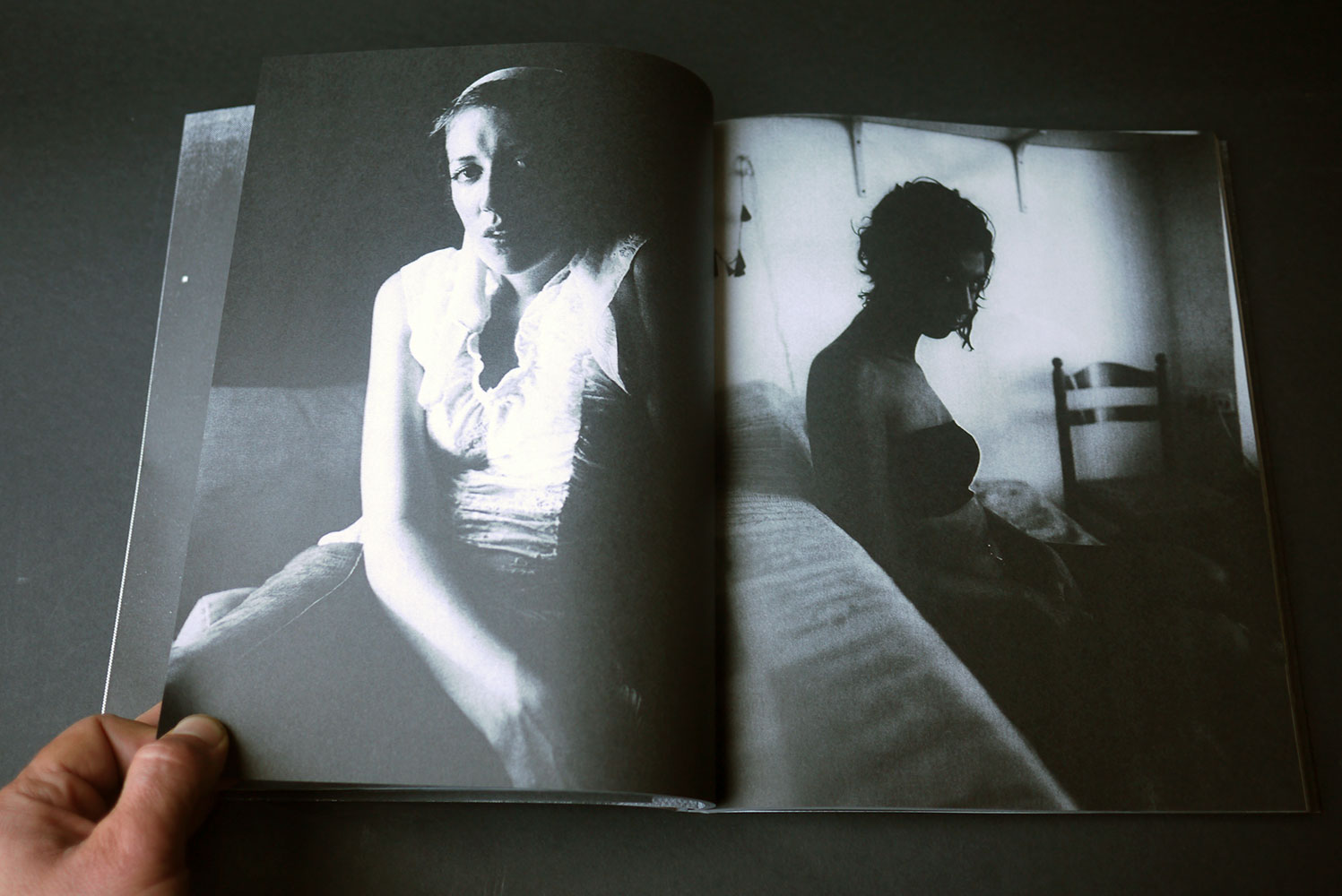 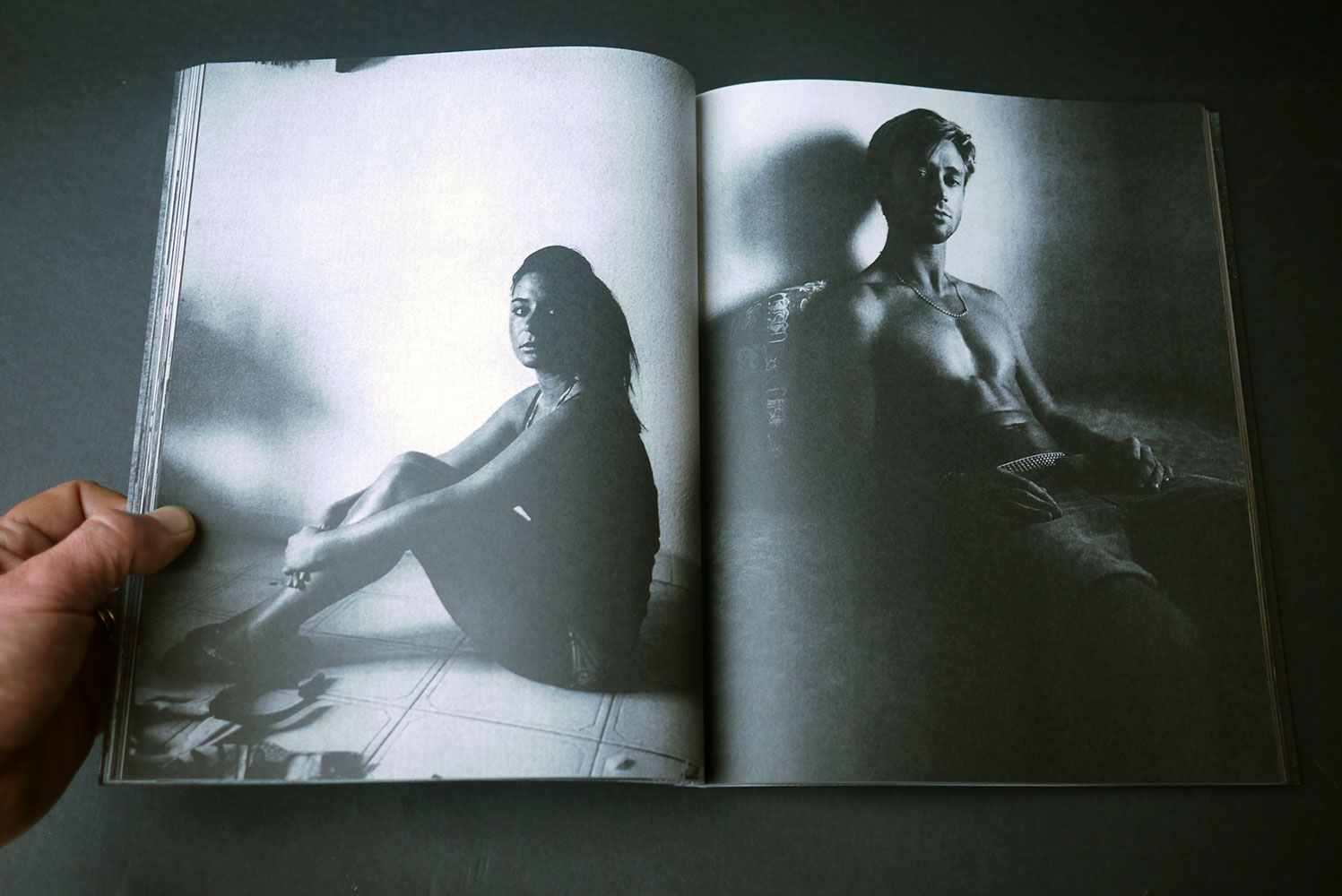 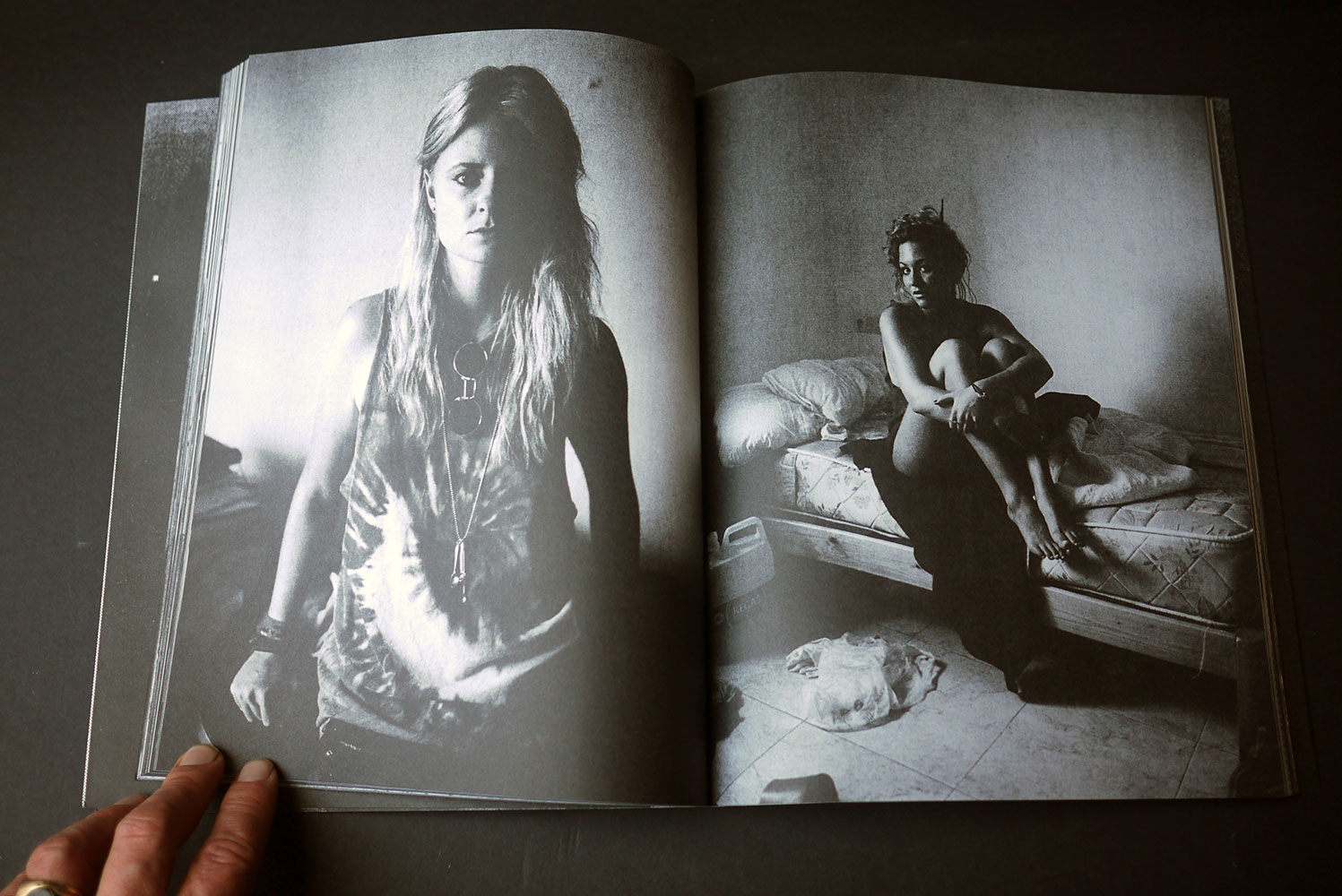 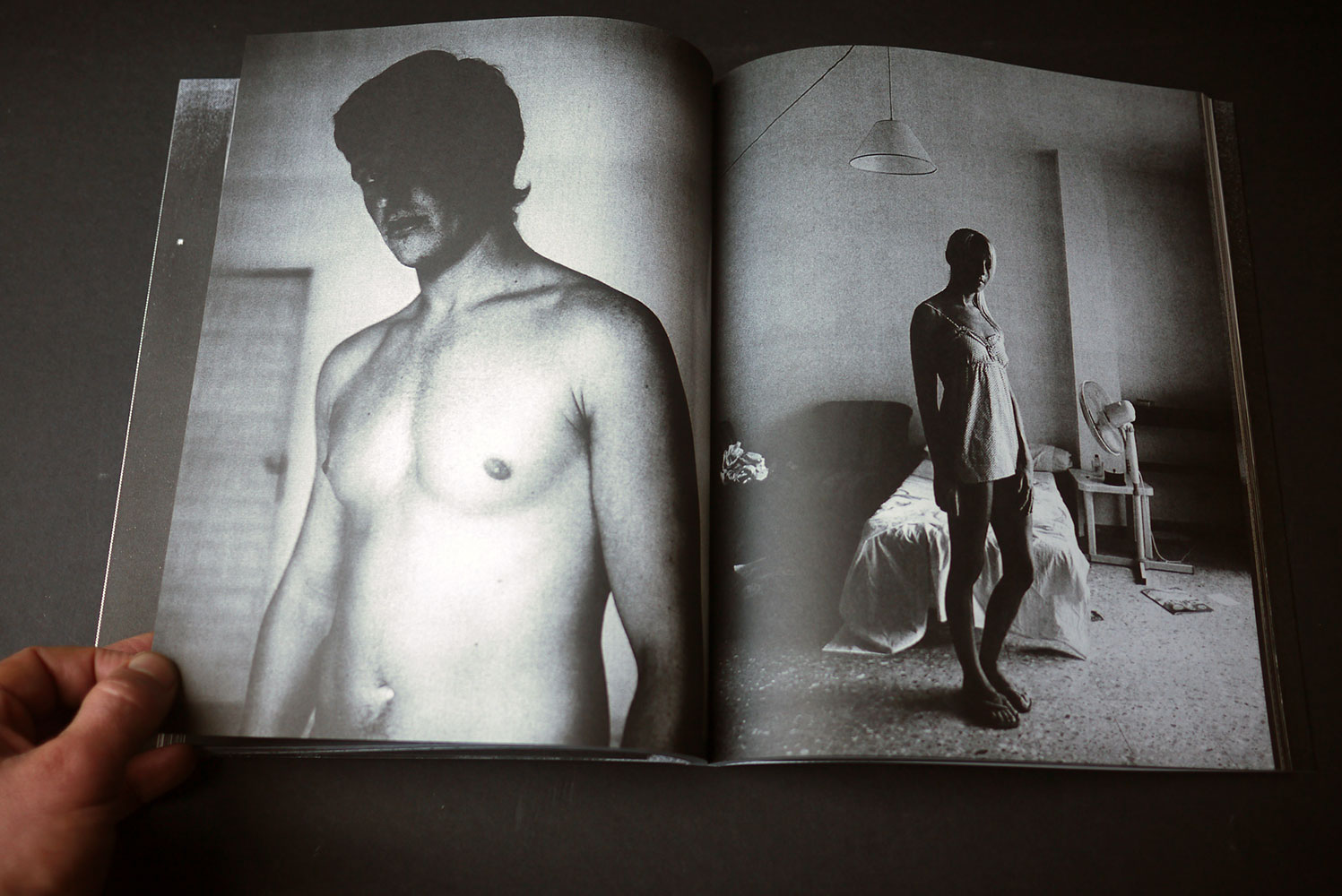 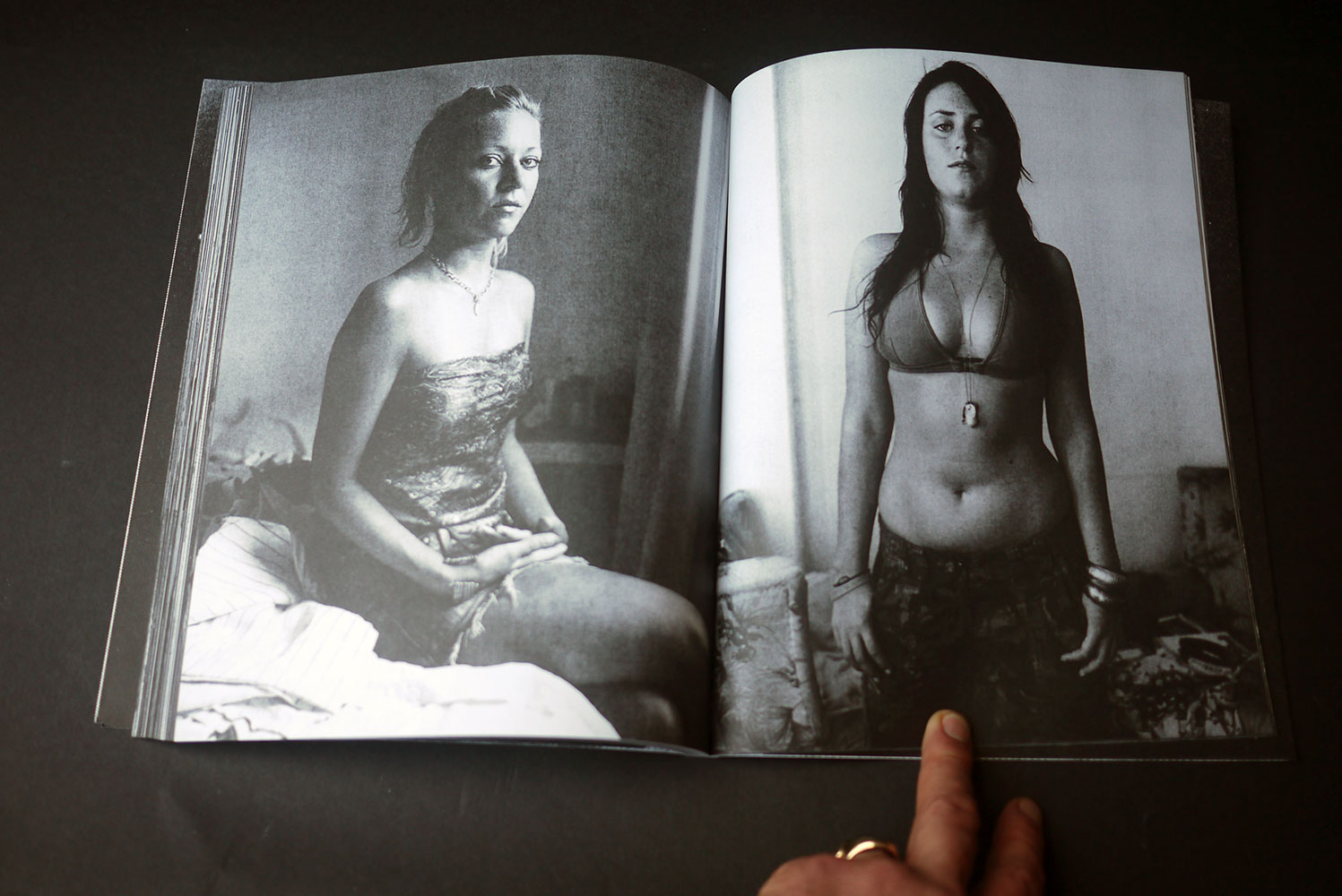 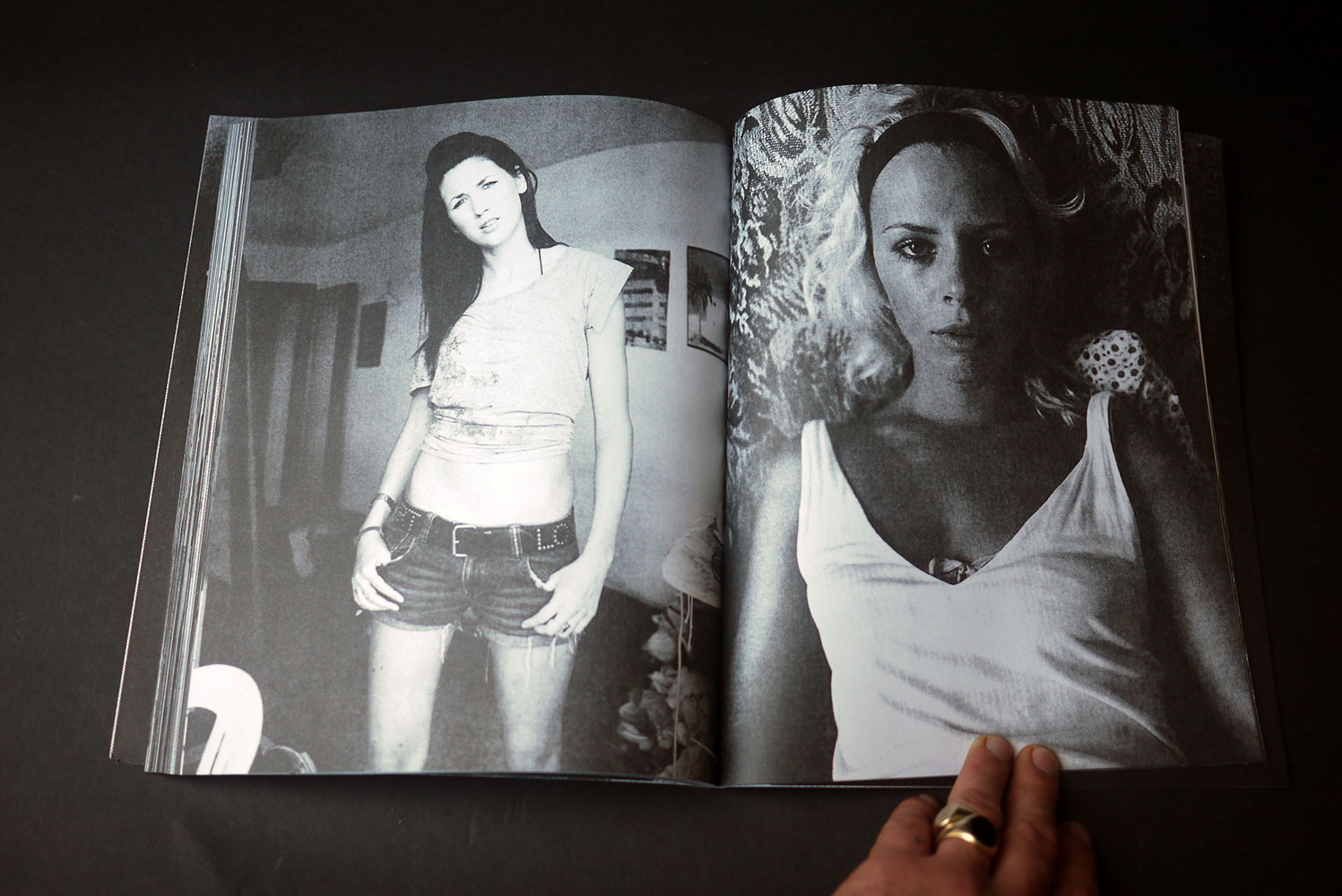 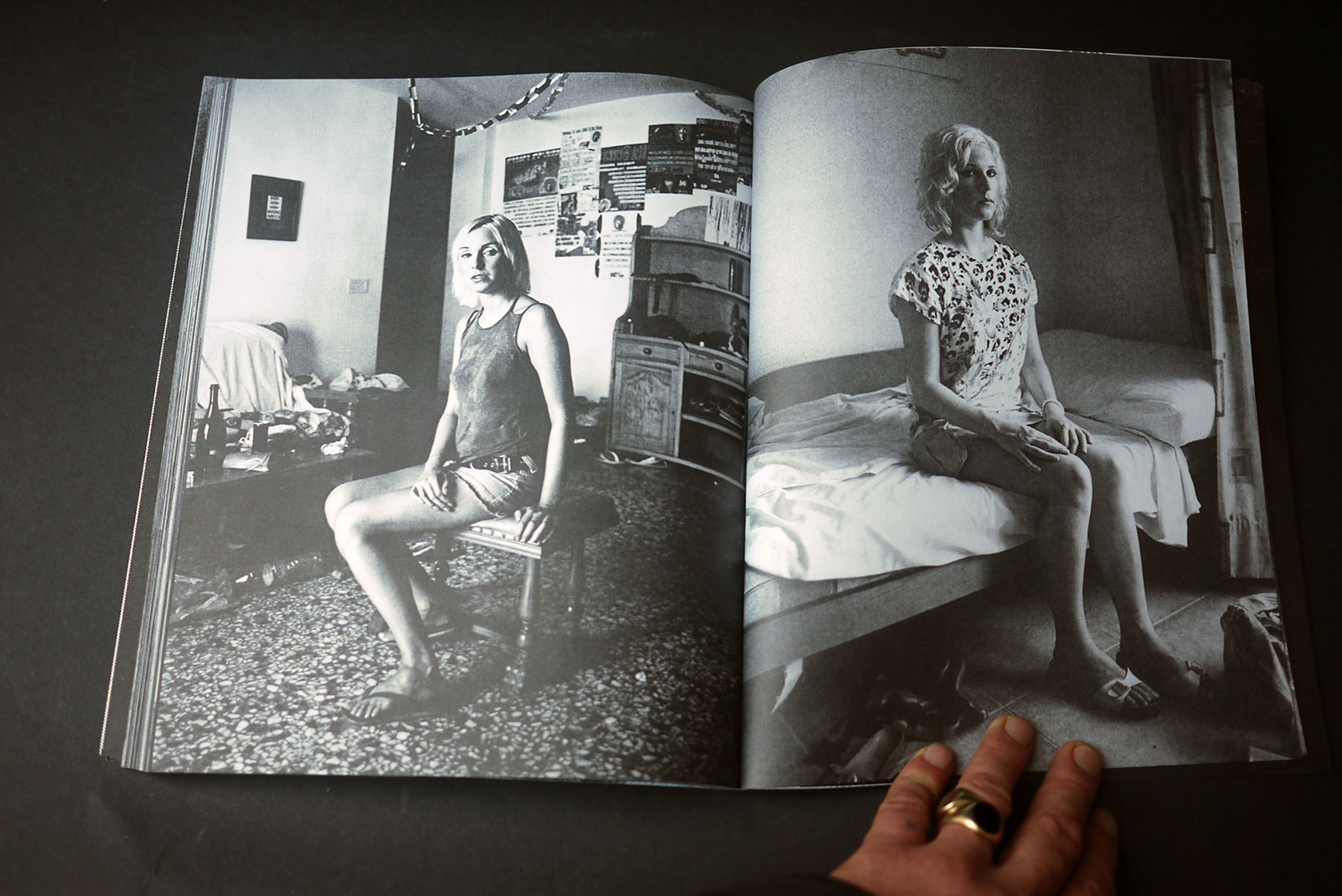 In this photographic art book Gareth McConnell continues to revisit his photographs of young visitors to Ibiza – a well known series of McConnell’s, which is characterised by a more subtle understanding of his subjects than just the usual ones of sex, drugs and sunny hedonism. McConnell is a highly respected photographer, known for great technical ability. However, in this new book has reworked his studies as defiantly low-tech monochromes, with an exaggerated emphasis on reprographic redundancy, and a pleasure in the failures of vintage reprographic techniques. It’s as much, if not more, about photography and print themselves, as it is about its subjects.

McConnell has always had a poetic sensibility, situated in alignment with acute skills of documentary observation. Here, he transcends documentary orderliness, gathering his images into a darkened, narrative unity, so that they become servants of an ominous, low-lying mood. It’s the disturbed calm of heavy, electrically charged, pre-storm weather, or the ambiguous twilight of the awakening reveller – the reveller who does not know if the birds are singing for morn, or for eve.

* Accompanied by a new, informed essay by Matthew Collin, author of ‘Altered State: The Story of Ecstasy Culture and Acid House’

* McConnell’s first book to feature his Ibiza work was published by Steidl in 2004, with an essay by Neal Brown.

1. Thou shalt not force thy neighbor to alter his consciousness.

2. Thou shalt not prevent thy neighbor from altering his consciousness. *

‘The government, which violates the second of these commandments every day, is now beginning to violate the first, forcing students in some schools to take Ritalin, an amphetamine – like drug that quiets unruly children but may have side effects not yet known. It is likely, given the general character of governments, that similar violations will multiply beyond all our guesses when bureaucrats discover that they have such delightful new toys as drugs that will reduce whole populations to perpetual childhood, decrease their aggressive rebelliousness, stunt their alertness and generally turn them into the drones described by Aldous Huxley in his Brave New World. The heretic of the 21st Century might be, not a man who takes a drug the government forbids, but a man who refuses a drug the government commands.’

Where Strangers Take You by the Hand

The first settlers came to Ibiza around the seventh century BC; the Phoenicians, who were looking for a staging post to service their maritime trading routes. They named the isle after Bes, their god of protection, safety and dance, and developed a flourishing cosmopolitan port. Over the centuries that followed, Carthaginians, Romans, Moors and Arabs also controlled the island, leaving behind their traces in its culture, until it finally came under Spanish rule in the thirteenth century.

Those seeking mystic precedents cite the naming of Ibiza after Bes as an indication that its spiritual magnetism meant that it was fated to become a place of revelries – and that the worshipping of another Phoenician deity, Tanit, the goddess of love and war, also foreshadowed its eventful destiny. But the contemporary Ibiza – or at least the clubbers’ paradise with its extravagant pleasuredromes and wild terrace debauches under the airplane flight paths, its sunset bliss-outs and clandestine outdoor parties – is also a product of the military dictatorship of General Francisco Franco, who ruled Spain from his victory in the Civil War in 1939 until his death in 1975. Franco opened up seaside havens like Ibiza to mass tourism in an opportunistic hustle for foreign revenue to prop up his regime. In the late 1950s, the island only received a few thousand tourists each year, but by 2000, more than two million were arriving.

In the decades before tourist developments sprang up amid the rustic agricultural landscape of the ‘White Island’, the visitors were mainly bohemian adventurers and artistic freedom-seekers – people like the Berlin Dadaist Raoul Hausmann, who had fled Germany fearing repression in the 1930s after his art was branded ‘decadent’ by the Nazis, as well as other writers and painters from around Europe spooked by the rise of fascism and Stalinism.

The idea of Ibiza as a tolerant haven had been already been established when the island gave refuge to Jews fleeing the Spanish Inquisition, and was compounded when another wave of Jews escaping repression from mid-twentieth-century oppression also found safety here.

The 1950s brought beatniks seeking alternatives to San Francisco, Paris and Tangier as well as sunshine, laidback tolerance and cheap booze. Among them, according to Stephen Armstrong’s book The White Island, was a shady ex-US soldier known as Bad Jack Hand, who started to organise jazz gigs and beach parties – one of the many foreigners of dubious reputation and licentious appetites who have taken temporary refuge on the island. Bad Jack may have helped to develop Ibiza’s nightlife, but it seems that he was, as his name suggests, not such a nice chap, and he ended up in a Spanish prison serving time for murder.

With the 1960s came Americans dodging the Vietnam draft and also the beatniks’ spiritual descendants, the hippies, who were seeking to bask in the cosmic aura for which Ibiza had already become known; at the same time, their presence enhanced the image of an ‘isle of liberty’. Although Franco still ruled mainland Spain, life was believed to be more relaxed on Ibiza, attracting Spanish gays, who added another layer to the image: as a playground for sexual nonconformists.“Ibiza may be one of those centres where the representatives of the avant-garde of a new civilisation are experimenting with a new way of life. It is more primitive, more spiritual…” Barbet Schroeder once suggested, apparently touched by the utopian vibes (or possibly by the sun).

But while the impecunious hippie peluts (‘hairies’) enjoyed their nocturnal bongo parties, increasing numbers of wealthy jet-setters and showbiz celebrities were also starting to buy villas on the island; among them actors like Errol Flynn, Ursula Andress and Diana Rigg. Just like the hippies, they were taking the opportunity to live as they wanted in what was then a relatively wild rural environment where few people were watching what they got up to, and those who did notice, didn’t care too much.

Musicians followed the actors as Ibiza started to cloak itself in a sheen of glamour as well as countercultural chic. By the 1980s, pop stars were regular holiday guests: charismatic hedonists like Freddie Mercury and Grace Jones frolicked at the hotel run by another iconic Ibiza renegade, Australian Tony Pike, who claimed to have presided over a poolside oasis of post-prandial cocaine binges and intoxicated lust. Pike’s hotel was also used as the set for the video for Wham!’s chirpy cocktail-bar hit Club Tropicana, whose lyrics unintentionally seemed to encapsulate some of the island’s charms: “Let me take you to the place where membership’s a smiling face,” the song begins. “Where strangers take you by the hand and welcome you to wonderland…”

By the 1980s, with strongman Franco dead and a new Spain emerging, most of the elements that would define Ibiza’s image as a disco paradise were in place. Channelling the jet-set glamour along with the post-hippie afterglow, seminal clubs like Amnesia, Pacha and Ku had grown from ramshackle origins into lavish arcadian palaces. Amnesia’s DJ, Alfredo Fiorito, was another of the island’s many fugitives. He had sought shelter from the dictatorship in his homeland Argentina that was persecuting journalists and rock promoters like him, and at Amnesia he started to play the open-minded mix of Euro-dance, early house and funky alternative rock that would later be codified as ‘Balearic Beat’. Meanwhile another DJ, José Padilla, who was to define the sunset sound of San Antonio by playing the Art of Noise’s Moments in Love at the Café del Mar as the orange sphere eased gently down beneath the Mediterranean skyline, had arrived from mainland Spain seeking the liberties prohibited by Franco’s rule. Perhaps just as importantly, a colony of devotees of the millionaire guru Bhagwan Shree Rajneesh (later known as Osho) was bringing in supplies of MDMA to use in its rituals. The little-known ‘love drug’ would soon percolate through to Ibiza’s dancefloors.

Matthew Collin is the author of ‘Altered State: The Story of Ecstasy Culture and Acid House’ (Serpent’s Tail).